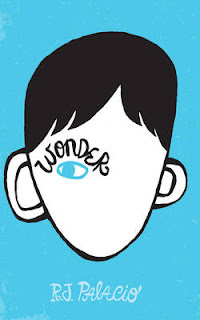 In One Line: Heart-wrenching, gorgeous tale of an ordinary boy with an extraordinary face.
Genre: Children’s literature future classic
The Gist:
10 year old August has been home-schooled all his life, his parents too scared to send him out into the big wide world because of his horrific facial disfigurements. But now the time has come to send him to proper school, and Auggie’s life, as well as the lives of the people closest to him, is going to change forever.
The Cover:
This cover blows me away! It screams: READ ME!!! I love the fact that the designers/editors took a chance with this one and went all out to create an image that has the potential to become truly iconic. The artwork from the cover resonates with the sketches inside the book too, and even the advance proof copy I read has a design ethic that makes it stand out from all the rest. Truly impressive, and a cover that captivates and intrigues rather than bores and confuses.
Why You’ll Love This Book
Why You May Not Love This Book:
The Hypersomnia Test:
It passed with glorious flying colours! I read the second half of this book in a couple of hours in Starbucks, and I sank back into my chair and just wallowed in the wonder of Wonder. The chapters are short, which keeps the pace up, and the plot doesn’t sink at all, anywhere. It just keeps going, and even if you’re revisiting moments from another perspective, you’ll never be bored. I was very sad when it ended - I could read the entirity of Auggie’s life!
Final Verdict:
Oh what a wonderful, wonderful book. This is one for kids to read, then for older brothers and sisters to read, and then for the parents and grandparents to pick up too. A lot of people I know actually cried at the end - I didn’t, but I was left with a lovely bubbly feeling of joy in my tummy. Read this book and become a better person!
Further Reading:
The Curious Incident of the Dog in the Night Time by Mark Haddon
When You Reach Me by Rebecca Stead
A Monster Calls by Patrick Ness
To buy Wonder please click HERE!!!
Posted by Nicole at 16:02 2 comments: 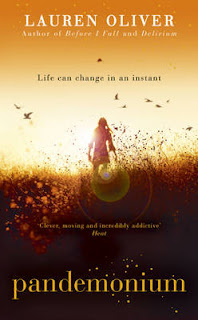 In One Line: The much-anticipated sequel to Delirium.
Genre: Dystopia-tastic
The Gist:
Then:
After the heartbreaking ending of Delirium, Lena finds herself learning to survive in The Wilds with other runaways and delinquents. Will she ever get over the grief of losing Alex? Will life be too tough for her and would she ever go back to the loveless world she grew up in?
Now:
Parallel to this story is that of New Super Lena, a schoolgirl in New York City, cured of Amore Deliria Nervosa and seemingly integrated into the world she once struggled to leave behind. But nothing is quite what it seems, and New Super Lena is a rebel with a cause and ready to fight!
(yeah, there’s a whole parallel plot line thing happening with alternate chapters from the Then and Now. It’s off putting at first, but you’ll get used to it I promise!)
The Cover:
Yeah... so... um... I’m not feeling it. I don’t get the relevance, it doesn’t match the hardback of the first book, and it doesn’t tell me anything about this one. If I read this on the tube (I read the proof edition, so I didn’t know what the cover would be at the time) then the people around me would have absolutely no idea what this book was about, or even it’s themes or genre. Distinctly, and disappointingly, meh.
Why You’ll Love This Book
Why You May Not Love This Book:
The Hypersomnia Test:
Passed. Passed. Passed. I didn’t want this novel to end.
Final Verdict:
If you’re only going to read one dystopian series, then this one has to be it. The writing is beautiful, verging on literary, and the plot is plausible enough for you to get really involved. Pandemonium goes in an entirely different direction than you would expect from Delirium, but with such a gamut of dystopian tales out there it’s a relief to read something truly good and wonderful. Be warned, once you read this, nothing else will compare. I read another dystopian novel straight after, and all I could think was ‘this is no Lauren Oliver’. Plus the kissing. Oh my god the kissing. *melts again*
Further Reading:
Delirium by Lauren Oliver
Matched by Allie Condie
Pure by Julianna Baggott (read my review HERE!)
To buy Pandemonium please click HERE!!!
Posted by Nicole at 16:53 1 comment:

Review: Ash Mistry and the Savage Fortress by Sarwat Chadda 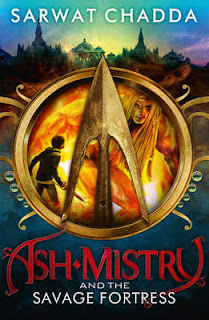 In One Line: geeky kid on holiday in India uncovers dastardly plot to release absolute evil upon the world, and kicks some ass!!!
Genre: middle-grade mythological action adventure - with added demons!
The Gist:
So here’s the disclaimer: this is NOT YA, and I know the author, so I was really nervous approaching this one. What if I hated it? What if you all think I’m just being sycophantic?
Well here’s the truth. You know when you go with your mates to the cinema, and you can’t decide what to watch so you go and see that Hollywood blockbuster because the chances are the majority will end up liking it (while inside you’re going but I WANT THE CLASSIC ROM-COM DAMMIT!)? And then you end up getting floored by said blockbuster even though you were dead cynical about it and thought it might just be an overblown CGI excuse to wear 3D glasses? Well this book is like that. I was all prepared to just nod and smile politely and pat lovely Sarwat on the back and go Well Done You! And then I got floored. Because this book ROCKS.
Ash is your typical English-Indian kid who is on holiday in India visiting relatives with his kid sister Lucky. When he accompanies his uncle to visit Lord Savage (BLATANT BADDIE ALERT!) he unwittingly gets embroiled in a mega-plot to unleash a devastating evil across the earth (but mostly India). Cue evil demons, not so evil demons, snakes, spiders and kids in baggy pants type things doing ancient martial arts! Kapow!!!
The Cover:
Look guys! There’s Ash, with his weirdy sword about to kick the sh*t out of a giant muscular demon with dreads!!! The ethos of this cover is ‘what you see is what you get’ and it sets a template for further books.
Why You’ll Love This Book
Why You May Not Love This Book:
The Hypersomnia Test:
Do you know what, this book did it for me. The pace, the action scenes, the scary creatures - there were moments when I thought that reading this book was better than many of the big blockbuster films that Hollywood has been churning out lately. And I was gripped. No sleepytimes during this one!
Final Verdict:
I will be the first to say that this isn’t the kind of book I will usually read (as you may be able to tell from my blog reviews so far), but I got along with this book so well it’s made me realise that often YA can be lacking in pace and darn good storytelling. Regardless of your age, it’s hard not to be sucked in by this epic twist on Indian mythology. I’ll also say this: I have never ever been tempted to visit India (I don’t think I will get on with the food, and I am a VERY fussy eater) but now I am seriously thinking about going. For as much as this book is a classic action-adventure for younger readers, it’s got so much respect for the culture of India that it does a pretty good job of selling the place for people like me!
Further Reading:
Percy Jackson and the Lightning Thief by Rick Riordan
The History Keepers by Damian Dibben
Time Riders by Alex Scarrow
To buy Ash Mistry and the Savage Fortress click HERE!!!
Posted by Nicole at 11:08 1 comment: 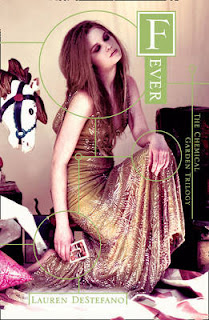 In One Line: the sequel to Wither!!!
Genre: dreamy-dystopian-drama
The Gist:
This book picks up directly from where the last one left off, so let me warn you HERE BE SPOILERS!!! I won’t be spoiling anything from this book, obvs, but there is a chance that I will mention something from Book 1 in the trilogy, so if you haven’t read that one yet, buy it HERE, read it quickly, and then read this review of Book 2.
Two-tone-eyed Rhine has escaped from the mansion where she was kept as a wifey to naive Linden and is desperate to get to Manhattan, where she hopes to find her two-tone-eyed-twin brother. Along the way she gets sucked into a twisted sexy carnival, meets a fortune teller, nearly gets raped by the owner of a diner and succumbs to a devastating illness. Hilarious hijinks this is not.
The Cover:
Tyra: Girl you rocked that photo like that rocking horse rocked the merry-go-round!
Andre Leon Talley: I’m adoring that broken down doll, the gentleness of the hands - I would hang this in my salon!
Noted fashion photographer Nigel Barker: I love how you’re wearing the dress, the dress isn’t wearing you. You look sad, distressed and broken, but you never lose that outer model. Well done.
Mr Jay: Tyra, I must say, we had a few problems on the set with this one. We tried to get Model-Rhine to wear the contact lenses to make one eye brown and one eye blue, but Model-Rhine just wasn’t going for it. This is why the we ended up with a closed eye shot.
Tyra: This is a problem that lots of models have. Instead of doing this - *makes face* - you need to be doing this - *makes face slightly tenser*. And girl, even with your eyes closed, you could have been smizing. You got the tone of the shot just right though. I was going through your film, and every shot was wracked with sadness and angst, but we chose this particular shot because you just look like you’re letting go, like the weight of the dystopian world is on your shoulders and you’re losing all hope. You nailed it.
Ms Jay: The photo is fabulous, but you need to work on your walk.
(please note: the above will only make sense if, like me, you watch a LOT of America’s Next Top Model)
Why You’ll Love This Book

Why You May Not Love This Book:

The Hypersomnia Test:
Passed! Passed! Passed! The pace was so quick I sped through the book, jumping from one mad dramatic scene to the next. And every now and again you glimpse the intimacy between Rhine and Gabriel, and this was just steamy enough to stop my brain drifting off into it’s hypersomniacal state (you may have noticed after reading a few of my reviews that a good sex scene will always stop me falling asleep).
Final Verdict:
I couldn’t help but feel that this book was the bridge to take me to Book 3. When I’ve finished reading the entire trilogy, will I remember Book 2 as a standout? Probably not, but it does its job well, widens the scope of DeStefano’s universe and presents some interesting moral conflicts. And the cover is SO pretty.
Further Reading:
Wither by Lauren DeStefano
Switched by Amanda Hocking (read by review HERE!!!)
The Handmaid’s Tale by Margaret Atwood
Buy Fever by Lauren DeStefano HERE!!!
Posted by Nicole at 11:32 2 comments: